In trying to track down who created this awesome vintage truck we have discovered that back in September Levi’s took part in a cross county mobile from New York to Oakland, CA. The mobile tour followed a public art, film and music project aboard a 1953 Sante Fe train. Levi’s 35 foot Airstream trailer with interior designed by D-CD, followed the tour to several locations and served as a beautiful interview space as well as a mobile display for Levi’s Icon collection. 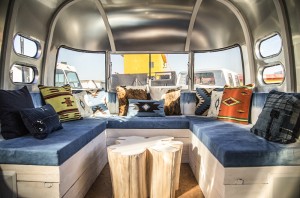 The Airstream featured custom shelving and seating aimed at creating a west coast vibe.  The Airstream also had a projector and pull down screen in the rear for screening films. 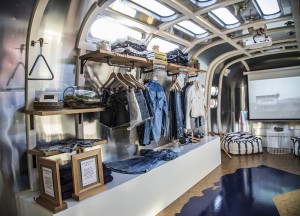 The airstream trailer was also used as a gift wrapping station during the holidays.  Items were wrapped by a well trained staff.  The event sought to take some of the task out of holiday shopping.  Patrons could have any items purchased at Levi’s wrapped for free as well as one additional item. 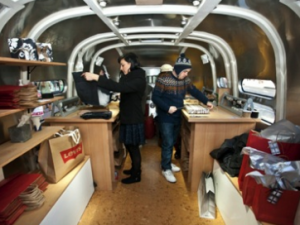 The trailer was part of Airstream’s initiative to partner with brands from Veuve Clicquot to Fender to Levi’s and the global (RED) ™ charity, each using the new Airstreams in different ways. The project was developed in part because the iconic silver trailers are becoming more popular with brands across the world using the functional and recognizable shape to activate innovative marketing campaigns. “This year, we’ve aligned with some of the most diverse and interesting brands across spirits, music, retail and philanthropy,” said Bob Wheeler, CEO and President of Airstream. “Throughout all of these different campaigns, the excitement surrounding Airstream and the quality product we produce remains at an all-time high. We look forward to some interesting partnerships in the works for 2014 and seeing how we can create more creative, alternative uses for our travel trailers.”

ExperientialVehicles.com is not currently affiliated with Levi’s or this mobile tour program, information was found on the web while researching an exceptional build.